Who's Taking The Hart? 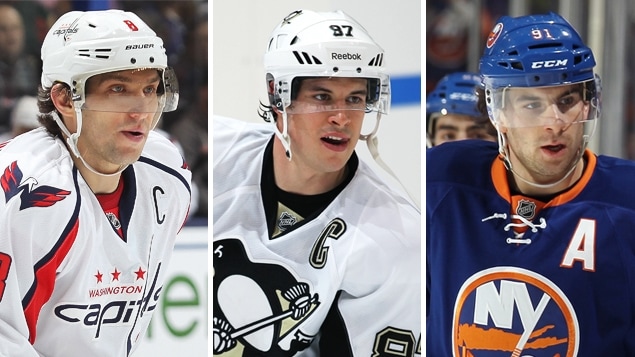 On Friday it was announced that the three nominees for the Hart Memorial Trophy were Sidney Crosby, Alexander Ovechkin and John Tavares. All three deserve the nominations, but only one can take it home. What's interesting this year is that all three have different season storylines that make them worthy of the MVP award. It past seasons it seems that the top scorers are simply chosen or a goalie who stood on their head, but this year with the a shortened season there is no clear front runner for the award.

Let's take a look at the storylines:

The Dominant, But Injured

Sidney Crosby pretty much had this award locked up before taking a slapshot to the jaw that would put him out a month and see him lose his scoring lead 25 days after the injury. Basically the story here is that Sid was the best player in the league for 75% of the season and would have won it easily had Brooks Orpik had better aim. Did he do enough in those 36 games to win the Hart? How much did his nomination drop off from when he got injured to when the voting took place? Was he surrounded by too much talent in Pittsburgh? These are all questions the Professional Hockey Writers Association had to consider and it's a tough choice.


The Fading Star Who Found The Net Again

Alex Ovechkin's name was being dragged through the mud at the halfway point of the season before he started lighting it up like it was 2008. Ovechkin's name was fading like Marty McFly in Back to the Future before he scored 23 goals in his final 23 games to lead his Capitals to another Southeast Division win. The story here is Ovechkin no longer looked to be a superstar before scoring at an unbelievable pace and leading his team to the playoffs. Was it too little too late? Was his competition easier in the Southeast? This is a tough call as when the voting took place he was the hottest player in the league and you have to wonder how much that influenced the PHWA.


The Budding Superstar Who Led His Team To The Playoffs

John Tavares was consistent throughout the season and without him the Islanders wouldn't have been playing any hockey in May this year. Finishing 3rd in goal scoring with 28 goals, Tavares scored timely goals in all situations to get the Isles into the postseason for the first time in 6 years. When Tavares came into the league many wondered how he would do with his lack of footspeed, but now you can tell he's become an elite player with and improved in every aspect of the game. Everyone knows he's a star player, but he took it to another level this season and became a superstar.


This will be one of the toughest Hart Trophy's to be decided in recent memory will three great candidates in a shortened 48-game season. Who do you think will take it home?

Posted by Dirty Dangle at 11:22 AM
Email ThisBlogThis!Share to TwitterShare to FacebookShare to Pinterest