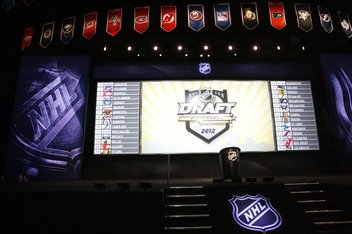 It's the long weekend and time to watch this little thing called the 2013 NHL Entry Draft in between tossing back beers at the cottage on the dock. It's good way to have some fun and drown your sorrows when your team makes a pick you disagree with, just don't be an idiot and go too hard to the point where you're puking like these kids after the Wingate test at the NHL Combine.

The rules are simple: p﻿ick your own draft order for the 1st round or use one of the many “expert” draft predictions out there (here's Bob McKenzie's rankings). Once you have that list, follows the rules below.

It's summer and a weekend so grab some cold beers and play along. With so many Halifax Mooseheads expected to be drafted in the first round, drinking Moosehead might be a good idea for this game.

Remember, have fun and don't be an idiot.
Posted by Dirty Dangle at 11:22 PM
Email ThisBlogThis!Share to TwitterShare to FacebookShare to Pinterest