Looking at the timing, magnitude, and level of difficulty of each collapse, let's see how stack up against each other:

While both teams shit the bed, the Bruins made it quick and easy for their fans to handle. 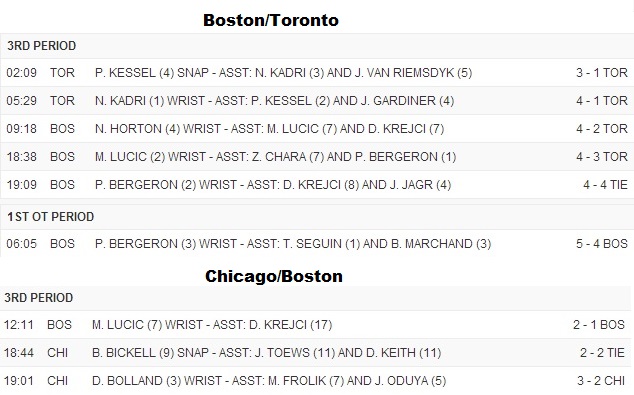 Boston's comeback against Toronto took a total of 16:47 to complete whereas Chicago completed theirs in 17 seconds (or 1:16 if you want to count finishing the 3rd period off). Most people were probably in the middle of texting a friend about Chicago tying it up or calling in sick for work as the game looked to be heading to overtime when Chicago went ahead 3-2 with just under a minute left. Toronto's collapse was like watching a snake eat a cow or something. It was long, it was ridiculous, and there was nothing anyone could do. Compare that to a defensively sound team like Boston dropping 2 goals in 17 seconds with under a 1:16 left and you have a massive collapse in a small timeframe. Timing wise, Boston's is just more shocking.

The Leafs collapsed in a quarterfinal Game 7 after missing the playoffs for 7 straight seasons. Had you asked any Maple Leafs fan before the series if they thought they would be playing the Bruins in Game 7 they would have told you they were just happy to be invited to the dance. The Boston Bruins collapsed in Game 6 of the Stanley Cup Final at home with just over a minute left from forcing a Game 7. Just from the Bruins big game experience and the situation of the collapse, the Bruins losing like that was total FUBAR for the Stanley Cup-deciding game. If you're going to fall apart, it's best to be as far from the Stanley Cup as possible thus the Leafs were smart in orchestrating their demise in the first round. Given the stage and situation, the Bruins collapse is bigger than that of the Maple Leafs, especially since Lord Stanley's Cup made an appearance:

Overcoming a 4-1 deficit in the final 11 minutes of the 3rd period of a Game 7 and then winning in overtime is a once in sixty lifetimes feat. You could see the shift in momentum as Boston simply took over and Maple Leafs fans prayed for the bleeding to stop. It was extremely difficult for the Leafs to collapse like this but they folded like a Canadian Tire lawnchair and made it look easy. Compared to Boston letting the top regular season team get a puck by Rask with an extra attacker is not that surprising considering the firepower they had out on the ice. Sure allowing the go-ahead goal 17 seconds later is pretty tough, but allowing 4 unanswered goals in a Game 7 like the Leafs did is pretty much the same as beating Battletoads solo - virtually impossible. The Leafs score a perfect 10 for the level of difficulty of their 4-1 3rd period collapse.

What do you think was the bigger collapse?
Posted by Dirty Dangle at 10:41 PM
Email ThisBlogThis!Share to TwitterShare to FacebookShare to Pinterest