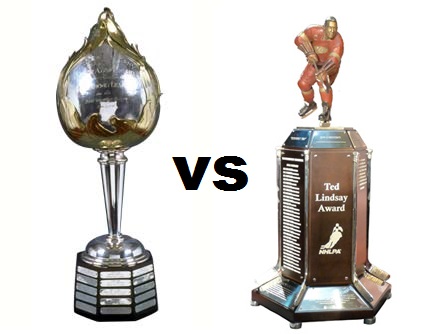 We aren't going to make this a Crosby vs. Ovechkin debate since coasting through the first half of the season and not being able to eat solid food for the last month of the season are two different things, but let's look at the trophies:

The Hart has the greater history dating back to 1924 and is considered the highest individual honour in hockey. Given to the player judged most valuable to this team and voted on by the Professional Hockey Writers Association, there is always plenty of debate around who is the most deserving of the award. This is the trophy most players want on their resume when they call it a career and the one fans argue most about with plenty of discussion surrounding the definition of the award.

The Ted Lindsay Award is awarded to the league's most outstanding player and is voted on by the NHL Players Association. Introduced in 1971 and often considered the companion to the Hart, it's a quality honour as your peers have voted you the best in the league. 13 players have won the trophy along with the Hart in the same season and this feat as happened 24 times in the 42 years the award has been around.

So now that we know the definition of both awards and who is voting on them, which one would you rather win? Would you rather be declared the MVP voted on by hockey writers or would you like to be nominated the most outstanding player in the league by your peers?

Personally, I would rather be nominated the best in my league by my peers that I'm playing against. I sometimes wonder how certain hockey writers are even given votes when I read some of their articles. There are some great hockey writers out there who truly know the game and understand it, but some of these hacks shouldn't even be talking hockey. Players feedback is awesome and we love hearing from them every season when they do their players poll and vote on the best players at different aspects of the game. They play the game and know their shit, I'd want to be recognized by them rather than some guy like Damien Cox.

Posted by Dirty Dangle at 9:44 PM
Email ThisBlogThis!Share to TwitterShare to FacebookShare to Pinterest