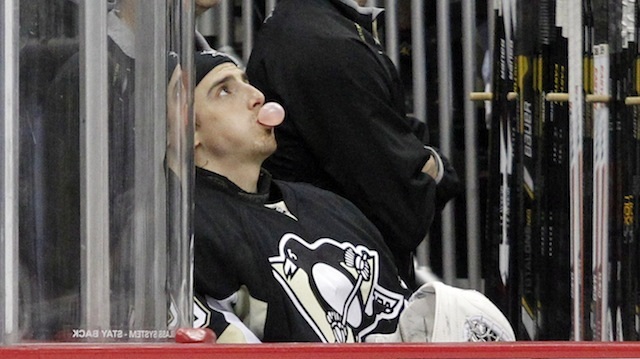 The Pittsburgh Penguins have been swept out of the Eastern Conference Finals by the Boston Bruins and many questions will surround the team this offseason as a result of their disappointing playoff finish. Will Dan Bylsma be back to coach the Penguins next season? Will Jarome Iginla return? What has happened to Marc-Andre Fleury and what do they do with him?

That last question might be the biggest question this summer as Fleury faltered in the playoffs once again and has looked like a broken goalie sitting on the bench for a majority of the postseason. Once pegged as the next great Canadian goalie and the guy many thought would be battling Carey Price for the #1 job in Sochi next winter, the former number one overall pick has become an expensive benchwarmer. Now 28 years old, Fleury has dwindled in the spring the last 2 years when most flowers are supposed to be blooming.

Fleury put up respectable numbers this regular season with a 2.39 goals against average and .916 save percentage and in recent years has proven to be a decent regular season goalie for the Penguins. Even though he does have a Stanley Cup on his resume from 2009, Fleury has also proven to be a struggling goalie in the postseason for most of his career.

Let's take a look at the last 10 Cup-winning goalie stats:

Fleury ranks 2nd last in goals against and dead last in save percentage of the last 10-Cup winning goalies. Those numbers stack up similarly to goaltenders with 14 or more playoff wins dating back to 1993. Fleury has always been one of the most athletic goalies in the NHL and sometimes it seems to get in him trouble with him sprawling all over the place and having strange goals sneak by him. This is a problem in the playoffs for him as he's struggled in 5 of the past 7 postseasons with a 3.26 GAA and .880 SV% in those years. Just looking at his playoff stats, that 2008 playoff run where the Penguins fell short to the Red Wings appears to be an anomaly. He might just be the worst playoff goalie to win the Stanley Cup.


It's going to be pretty interesting how things turn out for Fleury this offseason with 2 more years left on his contract and a cap hit of $5M/year. Does he get traded? Does he get bought out? Do the Penguins give him another shot?

Posted by Dirty Dangle at 11:18 AM
Email ThisBlogThis!Share to TwitterShare to FacebookShare to Pinterest