Following the first round we looked at some of the injuries that were revealed following elimination from the playoffs and they didn't disappoint. Now after two months of battle and the Stanley Cup handed out there is nothing for the Boston Bruins and Chicago Blackhawks to hide on the injury front so let's take a look at what these warriors were playing through.

Patrice Bergeron: Broken rib, punctured lung, torn cartilage and muscle tissue, and a separated shoulder.
Bergeron was easily the warrior of the playoffs after going to the hospital during Game 5 and somehow being able to play Game 6 with a broken rib and some torn muscles. To make things worse, he also separated his shoulder in that final game. If things were shitty for Bergeron after losing the Stanley Cup, he then had to be hospitalized for another 2 days as they found a hole in his lung. Was it from a pain needle or the rib? We might never know, but Patrice Bergeron pretty much summed up what playing in the Stanley Cup playoffs is all about.

Marian Hossa: Slipped back disc injury
We all knew something was wrong with Hossa as he just seemed to a lose a step midway through the playoffs. His skating was definitely affected. Was it his groin or hip? Maybe a foot injury? How about a disc pushing on a nerve that made his foot numb. Yep, that's the one. As a result of not being able to feel his foot he simply couldn't skate like the Marian Hossa we know. Next time your foot falls asleep and you try to walk across the room think of Marian Hossa hoisting the Stanley Cup.

Bryan Bickell: Grade 2 MCL sprain
Bickell showed up big in the playoffs with 9 goals and 17 points, but he looked a little off to start the Stanley Cup final with 0 points against the Bruins. Then when the Hawks needed him most he put together 4 points in 3 straight Chicago wins as they took home Lord Stanley. It was revealed after the series that Bickell had a grade 2 MCL sprain which meant he had some torn fibres, but the ligament itself was still intact. This injury should have sidelined him three to four weeks, but there Bickell was tying up Game 6 and playing through the pain.

Andrew Shaw: Broken rib and cracked cheekbone
Shaw apparently broke a rib in Round 2 against the Detroit Red Wings, but didn't miss any games due to the injury. I need to tell my brother about these guys playing with broken ribs because he's been bitching about a rib injury for years now. Shaw also cracked a cheekbone after getting hit in the face with a puck in the second period of Game 6. Not only did this stop a scoring chance, but it led to one of the greatest Stanley Cup hoists of all time. 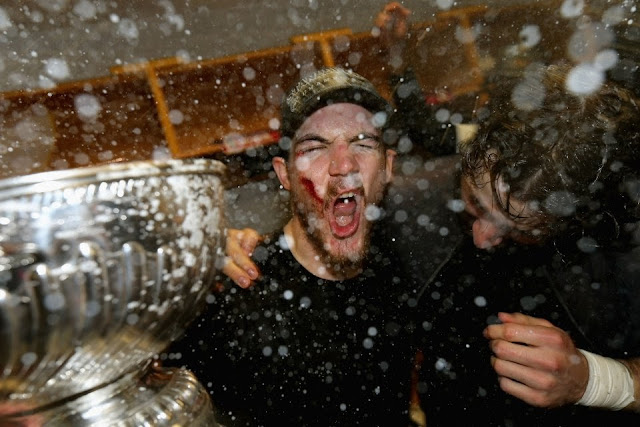 Michal Handzus: Broken wrist and torn MCL
The journeyman acquisition at the trade deadline ended up being a great one for the Hawks as he was solid throughout their Stanley Cup run putting up 11 points and grinding out the tough minutes. Little did we know that he was playing through a broken wrist and torn MCL. How he did this is a mystery, but it makes sense that Handzus was second in line to receive the Stanley Cup from captain Toews for his contribution in the playoffs.

Nathan Horton: Dislocated shoulder
Horton's shoulder popped out during Game 1, but he came back for the remaining 5 games. While he wasn't as effective being held to only 1 assist in those 5 games, you kind of have to play when you look across the dressing room at Patrice Bergeron being rebuilt. The soon-to-be-UFA will require shoulder surgery, but should be back for next season.

Tyler Seguin: Hip injury
Following the Stanley Cup loss, Tyler Seguin talked about needing to see a doctor for something that's been bothering him the last two years. This is an injury some believe was code for his hip(s). You might remember a few years ago there were reports that Seguin had a congenital hip condition that makes him susceptible to injuries in that area. Perhaps that's catching up with him and could be the reason his name was floating around in trade rumours recently.

Jonathan Toews: Rung bell
When your best players rides the pine for the 3rd period in a pivotal game something is wrong. They'll probably never admit it was a concussion which makes me think they had the Leafs staff helping them out in the Stanley Cup Final. Toews would end up playing the following game and putting up a big 2nd period goal and setting up the game-tying goal. Not bad for getting his bell rung.

Posted by Dirty Dangle at 11:43 PM
Email ThisBlogThis!Share to TwitterShare to FacebookShare to Pinterest