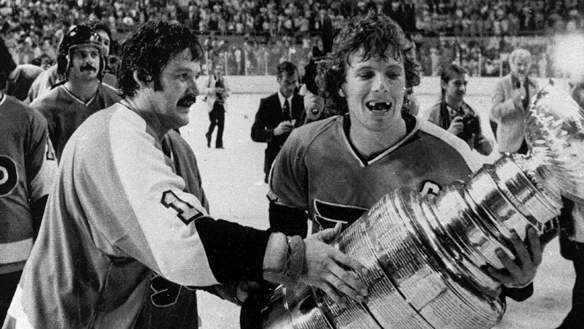 Been far too long since we've had a Wax Stain Wednesday so with a little free time and some recent mail, it is time to get this weekly post back off the bench and onto the ice. I have more cups of coffee and TTM autos to share so let’s get started.

This week’s post is one that is very fun to share. When I think about players who have represented Canada internationally and gave it their all for the Maple Leaf, Bobby Clarke is one player that immediately comes to mind. Love him or hate him, he was without a doubt a very talented player who could be abrasive when he needed to, step up offensively and score key goals when he had to, or just do whatever was asked of him for the betterment of the team and the pursuit of a win.

True, Bobby may have crossed some lines over the years, but as a player he did what it took to ensure that victory would be had and more often than not he took the blame of being a dirty player while the rest of his team enjoyed the win. I think that was especially true with the ‘72 Summit Series where as a 23-year-old kid who just finished his first 30-goal season in the NHL he played many roles on a team thatwas on the verge of being embarrassed and beaten but a very strong Russian squad. With that being said, it was pretty much the motto of the Broad Street Bullies to do whatever it takes to win in the mid 70s that led to two Stanley Cup Championships during a period where Montreal and Boston were both powerhouses. Clarke was the centerpiece of the Flyers franchise and to this day Philadelphia still only has those two Stanley Cups that he and the Bullies won.

Bobby Clarke’s career was more than just a few moments where he did what it took to win; Bobby was an amazing leader, faceoff man, playmaker and two-way forward. Clarke lead the NHL in assists twice and averaged over a point-per-game for his career in the regular season. Included in his 358 career goals and 1210 career points are 38 game-winning goals and 1453 penalty minutes. Bobby may have been the original “ball of hate", but he was a passionate competitor and he brought that passion into Philly's head office where most have undoubtedly heard about his tenure as GM of the Flyers and his feud with Eric Lindros.

On to the cards!

Here is a copy of his Rookie Card which I do actually own. 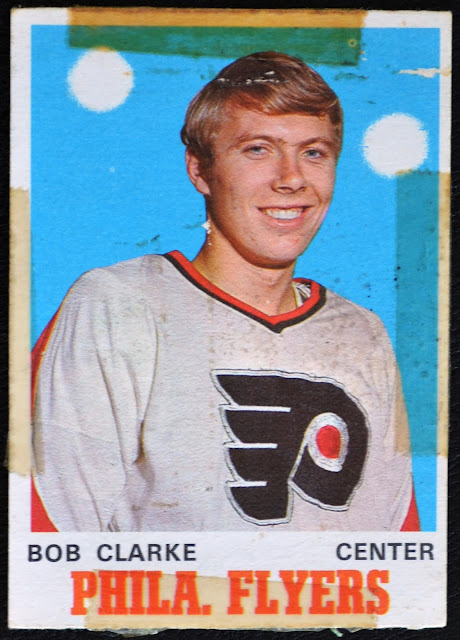 As you can see it is pretty tough looking condition wise, but I like to think that playing a career the way Bobby did you can’t be this old without a few bumps, bruises and pieces of tape!

Bobby Clarke was very kind and signed two autographs for me. 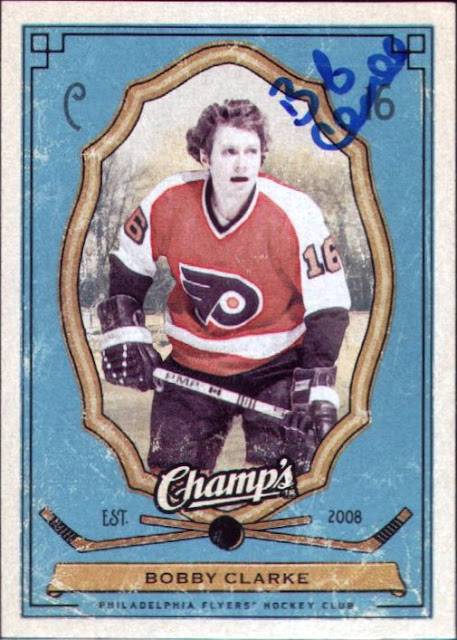 This first auto is from the 09-10 Upper Deck Champs release. This set featured may star players from the past and I really liked the photo they used. 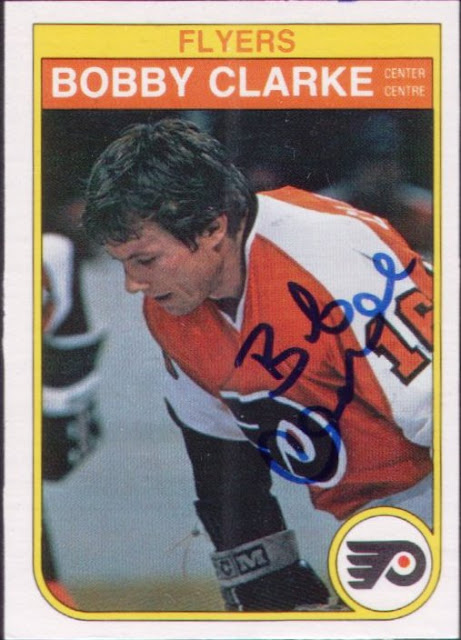 This card is from the 82-83 OPC set and is from Clarke’s playing days. It was towards the end of his career and you can see the grey hair mixed in with the dark hair on his head. He clearly looks like someone who has played over a thousand games and time is slowly catch up to him.

Well there you have it, two autos from one of the most fiercest competitors to ever step foot onto the ice and he was kind enough to sign two cards and sent them back to me all within a span of just a couple of weeks. Thank you very much Bobby, your legacy is one of winning in my opinion, sometimes at any cost.
Posted by Dirty Dangle at 6:19 PM
Email ThisBlogThis!Share to TwitterShare to FacebookShare to Pinterest