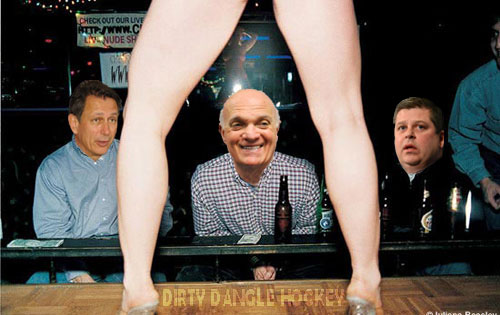 The dust from the free agent frenzy has settled, but the money is still raining down on this years crop as many NHL GMs paid big money for players in a lackluster group. Many GMs treated the frenzy like it was their first time at a strip club and tossed around quite a bit of money ($350M in the first 6 hours) which they'll most likely regret later. Some GMs must have lost track of the number of songs and got escorted to the ATM by five bouncers as the cash was just rolling in for career 50-point players.

With that strip club analogy in mind, let's take a look at how the 2013 signings compare to common personalities you might find at your local strip club:

The Feisty, Older Stripper Who Spikes You With Her Heel When You Don't Tip

Matt Cooke, Minnesota Wild
3 years, $7.5M
Cap Hit = $2.5M
Cooke landed a pretty decent contract and a 3-year term considering he will be turning 35 in September. Cooke does a great job pissing off the other team, but he can also chip in some offense and in his last full season scored 19 goals and 38 points. The Ottawa Senators and most of the East will be happy with Cooke signing in the Western Conference as their star players risk of injury greatly decreases.

The Best Stripper Out Of A Weak University Drop-Out Year

David Clarkson, Toronto Maple Leafs
7 years, $36.75M
Cap Hit = $5.25M
Clarkson was one of the most coveted free agents this year and supposedly turned down even more money to come home and play for the Leafs. Clarkson is a power forward who hits, fights, and score which has many hoping he is the reincarnation of Wendel Clark. Clarkson really cashed in on his 30-goal season from 2011-12, but just remember Leafs fans that Nikolai Kulemin also scored 30 goals once.

Ryane Clowe, New Jersey Devils
5 years, $24.25M
Cap Hit = $4.85M
Clowe is a big body in front of the net and GMs love his size and physical play. Hell, this kid loved him so much that he had the line of the year in "I'm sad about everything the Sharks have done, I'm so mad at them." Last season Clowe had a brutal year splitting time between San Jose (goalless in 28 games) and New York and only scored 3 goals in 40 games. When healthy, Clowe can be a 20-goal, 55-point bruising power forward that has opposing defenders looking over their should when he is plowing along. Definitely not worth almost $5M a year.

The Stripper That Has The Best Moves, But Gets Hurt Way Too Often On The Pole

Daniel Briere, Montreal Canadiens
2 years, $8M
Cap Hit = $4M
Briere was bought out of his contract with the Flyers and coming home to play in Montreal just seemed like a natural fit. If the oft-injured spinner can stay healthy he should be able to put up some points and for once he won't be one of the smallest guys on his team. If anything the Canadiens just gained some size in signing Briere. He definitely gives the Habs some veteran experience and should be a great billet for Alex Galchenyuk this season.

The Stripper Who Lives At The Club

Mike Ribeiro, Phoenix Coyotes
4 years, $22M
Cap Hit = $5.5M
The 33-year-old Ribeiro still can put up the points and scored 49 in 48 games last season with the Washington Capitals. Coming into this offseason Ribeiro was one of the best playmaking centres available for NHL GMs to toss dollar bills at and the Phoenix Coyotes were somehow the team with the deepest pockets. Ribeiro must like the desert climate and had his best years in Dallas getting arrested for public intoxication. Can he do the same in Phoenix before moving back to the province of Quebec to play?

Daniel Alfredsson, Detroit Red Wings
1 year $5.5M
Captain Alfredsson ditched the only team he ever played for and joined the many other Swedish players in Detroit for a chance to win the Stanley Cup. Alfie put up 26 points in 47 games last year and should be able to help the Red Wings offence out if he can stay healthy. You have to wonder about his intentions as if you really wanted to win the Cup wouldn't he have taken $800k a year and let the Red Wings use the left over money to bring another top player in?

The Stripper Who Also Doubles As A Bouncer

Bryan Bickell, Chicago Blackhawks
4 years, $16M
Cap Hit = $4M
Just like Bozak's case, Bickell is getting paid without much of a resume to show for it. In 220 career NHL games Bickell has put up 90 points and really cashed in on a strong playoffs last year with the Blackhawks when he scored 9 goals and 17 points in 23 games. Bickell is a big man who can go the net and be tough to move for guys not named Zdeno Chara.

Tyler Bozak, Toronto Maple Leafs
5 years, $21M
Cap Hit = $4.2M
Bozak played things cool when he joined the Leafs during the 2009-10 season and befriended the team's best player in Phil Kessel. That friendship has now resulted him being paid $21M over the next 5 years. Well played sir, well played. Bozak has never scored 20 goals or put up more then 50 points in a season which just screams Matt Stajan and 3rd line centre on most NHL teams. When Bozak doesn't perform and the storm comes rolling in, at least he'll have his thunderbuddy with him. 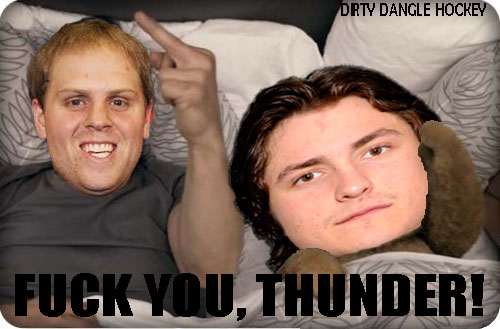 Posted by Dirty Dangle at 10:53 PM
Email ThisBlogThis!Share to TwitterShare to FacebookShare to Pinterest