Stephen Weiss: Worth the Risk? 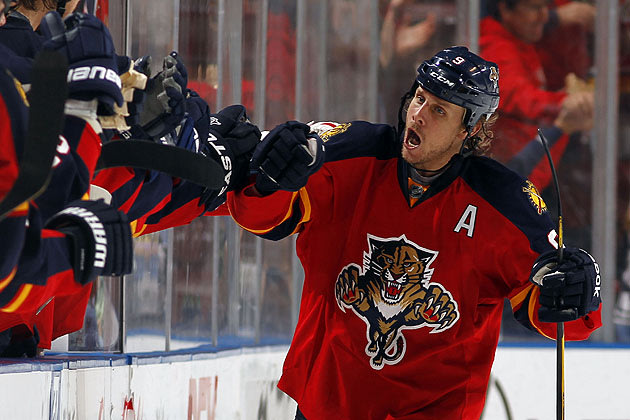 I always wonder about NHL players and what they think during contract time. Do you take the money that is offered from your current team or do you take a risk and see if you can get a lot more money on the market. With that said, there is always the uncertainly of how things can work out for you if you decide to leave the system and role you are comfortable with. This gets me thinking, how good is Stephen Weiss?

The former 4th overall pick in the 2001 NHL Entry Draft has played his whole career with the Florida Panthers and has only seen playoff action once. I can remember playing NHL 2003-NHL 2005 and always trading for Weiss because his potential was always off the charts. Unfortunately he never reached that superstar status in the NHL. Weiss put up career numbers during the 2008-09 season when he notched 61 points in 78 games and followed that season up with a career high 28 goals in 80 game. On average throughout his career he has been a 50-point centre when healthy.

Those are pretty decent stats for a 2nd line centre, but Weiss gets 1st line centre minutes down in Florida and is their main guy for offence. His play reminds me of the year Matt Stajan got plenty of playing time with the Maple Leafs and put 55 points in 76 games. The following season he had 41 points in 55 games for the Leafs before being traded to Calgary and he was able to use those stats into tricking the Flames into a 4 year,$14M contract with a $3.5M cap hit and he pretty much sucks.

If I am Weiss' agent the first thing I am doing is pointing out to Panthers management, Toronto Maple Leafs centre Mikhail Grabovski's 5 year, $27.5M deal. They both have had comparable stats over the last 5 years and with this being a weak free agency year, Weiss should be able to get a contract like that or even more with the centre crop of free agents looking pretty thin. (Grabovski has been bought out of his contract with the Leafs and will now compete with Weiss for free agency Monopoly money)


Posted by Dirty Dangle at 12:38 PM
Email ThisBlogThis!Share to TwitterShare to FacebookShare to Pinterest