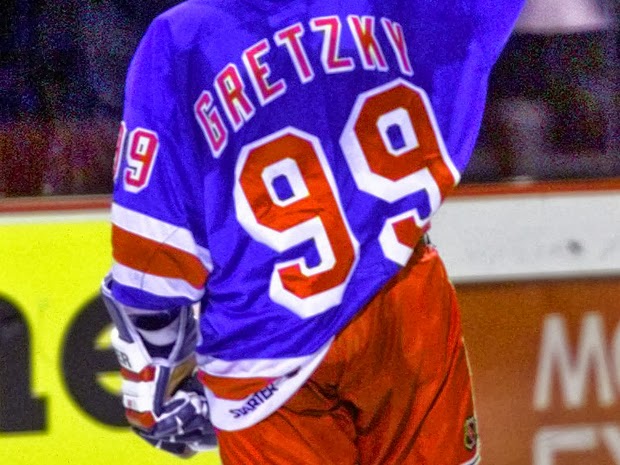 Every year there seems to be some tinkering with the NHL rules to change the game we love. Pucks over the glass now decide tight hockey games and make our beloved hockey players look like pathetic babies as they raise their arms for a penalty to be called. Trapezoids in the corners now prevent goalies from showcasing any puck handling skills they might have and decreasing the likelihood of goalie/player collisions in the corners. Well, it's a new season so there's another stupid rule the NHL has implemented.


"Players are not permitted to tuck their jersey into their pants in such a manner where the top padding of the pant and/or additional body protection (affixed to the pant or affixed to the Player’s body) is exposed outside the jersey. The back uniform number must not be covered or obstructed in any fashion by protruding pads or other protective padding."

The NHL is killing individuality with this rule by asking all players to have their jerseys untucked and the players don't seem to happy about it. They have every right to feel this way as this new rule change is a headscratcher. I mean, the most iconic player to ever play the game used to always have his jersey tucked in. Many players have already said that they don't even intentionally tuck their jerseys in, but that their jersey becomes lodged in their back protectors while skating and that is where the big problem lies. A jersey tuck could be a gamechanger by putting your team down a man for an accidental tuck after a shot or hit. How fucking stupid is that?

The scary part of the is rule is that it's pretty much making sure that the whole jersey can be seen to fans in the arena and most importantly, the larger viewing audience on TV. It just seems like the NHL is setting this up for jerseys to take on a more European look with advertisements smacked all over players equipment. I can't wait to buy a Maple Leafs jersey with Canadian Tire written on the back and BMO across the front. The best will be smaller market teams who will have to use real estate agents or used car dealers for their advertising.

Posted by Dirty Dangle at 6:43 PM
Email ThisBlogThis!Share to TwitterShare to FacebookShare to Pinterest