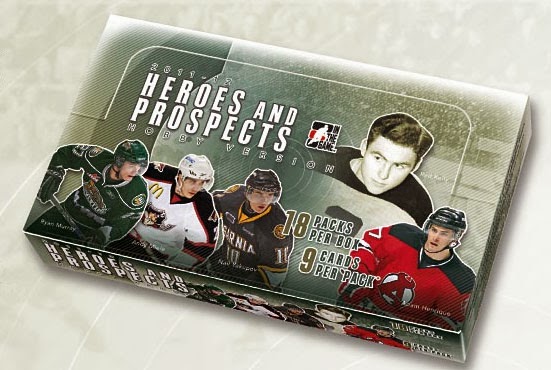 
So what I will try and do is share a little bit of info about the box, who might want to buy the product, as well as share my opinion on the product.  Also, I am going to give away one of the box hits by the end of the review.

First ever Wax Stain Review is:

2011-12 In The Game Heroes and Prospects
This product was released Feb 23rd, 2012 and this is the second box I have opened from this release. For those curious, this is what my first box looked like.

11-12 Heroes and Prospects Set Size 200 Base Cards
Product price: Originally the boxes where about $89.99, but I landed this box for $63.95 as a buy it now on eBay.
Each Box should yield at least (on average)
140 Base Cards
2-3 Special Non-Memorabilia Insert Cards
15-16 Heroes and Prospects Point Cards (Can be used to exchange for cool insert cards if you collect enough)
2-3 Autograph Cards
2-3 Game Used Memorabilia Cards

A typical box will yield a combination of 4-5 Auto or Memorabilia cards, with an advertised 4 “hits” per box.

Who does this product target:

This set is great for collectors who like Junior and AHL hockey, or want to collector future NHL superstars before they have NHL cards on the market. Also included are a few stars from years past including players like Cam Neely, Henri Richard, Teemu Selanne or Brad Park. It is a fun set to put together and there is a good range of players from the CHL and AHL. Most players are just emerging as NHL’er or are in position to be drafted reasonably high in the upcoming NHL draft(s).

Because this product doesn’t feature NHL players in their uniforms or even has an NHL license, there are no “true” rookie cards in this set. But, as of right now the only card manufacturer with an Aaron Ekblad autograph on the market is ITG so they do have some cool aspects there.

The base set “books” in the Oct 2013 Beckett Hockey magazine for 50 dollars and the typical base card lists for 40 cents. The most expensive card in the set is Nathan Mackinnon who books for 5 dollars. The value in this product is primarily in the inserts.  The product does offer some really rare cards limited to 1 copy which makes them both valuable and hard to obtain. Other inserts like a Nathan Mackinnon auto are currently listed at a value of about 150 dollars with many other inserts booking in the 15-100 dollar range. The typical game used card books around 15 dollars but you can often find them for sale online for less or more depending on the player.

With 200 base cards in the set, getting 140 out of a box allows you to get a good start on completing the base set. After buying two boxes, I am nearly done the set of 200 with about 3 cards missing. The base cards themselves are nice when you look at them. Both sides feature a nice gloss and the card stock is a good thickness and has a good feel to them. 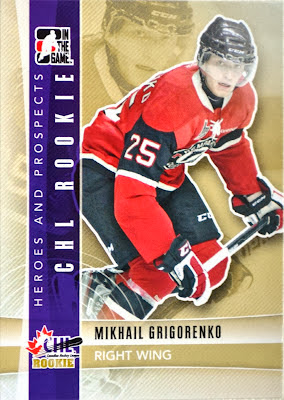 Here is what the base cards looks like. Since ITG doesn’t have an NHL license, all players are featured in their CHL, AHL or International jerseys. Here is Mikhail Grigorenko while he was a Quebec Rempart. 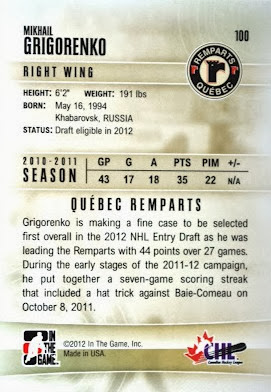 Here is what the back sides look like.  Each features a very solid write-up with some vital stats and the stats from the previous season. Every collector has their preferences, and I like both text and stats on the backs of my cards so this is a great design in my opinion.

Now let’s look at the hits of the box. These are often what many collectors chase and put premiums on when they decide what products they are looking to purchase. As a collector myself, I usually look at many factors before I purchase but one is the cost per hit ratio. Typically you can expect to spend anywhere from $25-40 per hit on new products and over time they do drop a little but not much below $15-20 per hit. This particular product is in the 15-20 dollar range so let’s what and how many hits I had.

Game used cards are not new anymore, but if you haven’t bought a pack in the last 20 years then they would be new to you. Each game used card usually has a piece of memorabilia framed or embedded into the card. When they first came out they were super rare chases often 1 in every couple thousand packs. Now many products have a few in each box. This product suggests that you can expect 2-3 of these per box. What is nice about ITG is their swatch sizes are among the largest for this price point and even though they are of their Junior or International club, they are still game worn by the player and a nice addition to any collection. Here are my hits. 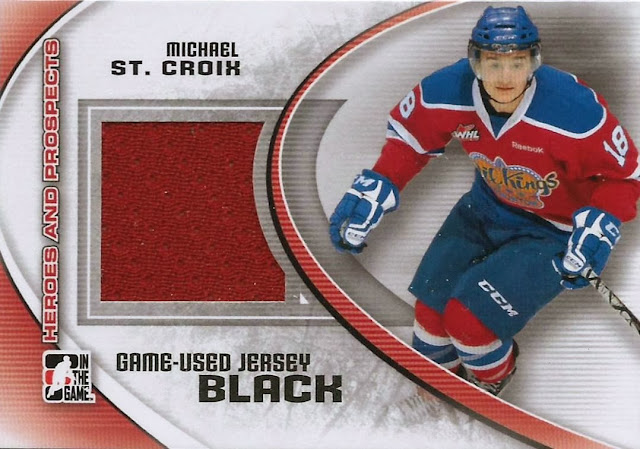 First hit was Michael St. Croix who was the Rangers’ 4th round pick from the 2011 NHL entry draft. This card features a photo of him playing for the Oil Kings and the swatch is from an Oil Kings jersey. With it being a Black Version, it is the most easily obtainable parallel with a print run of 100 copies. Unlike some companies, ITG doesn’t serial number many of their hits but instead they just release the print run and you are assumed to have one of the xx number produced. There is also Silver (limited to 30) and Gold (limited to 10) parallels as well as patch variations which can be as rare of 1 of 1.

Michael’s last three seasons of junior have been excellent and he is the all-time leading scorer in Oil Kings history. He even has NHL pedigree with his father (Rick St. Croix) having been a long-time NHL goalie. Not a bad hit, interesting to see if he can crack the Rangers line-up in the next couple seasons. 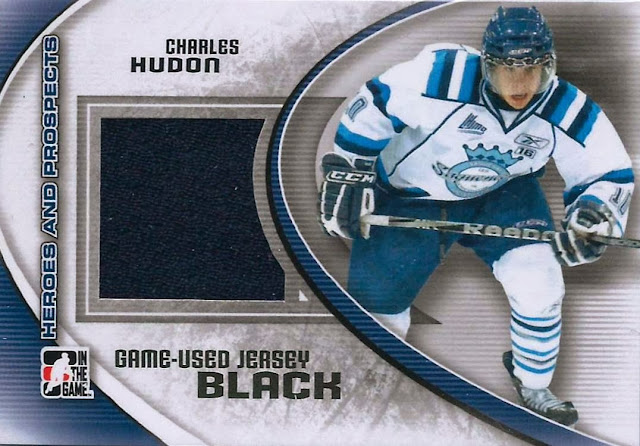 Charles Hudon may not be a household name yet, but for Habs fans he will likely be getting some more serious looks over the next few seasons. He was drafted in the 5th round in 2012 and currently with Chicoutimi he has 9 points in 7 games and with his age and experience he should be a lock to tear it up this season in the QMJHL. Like the St. Croix, this is limited to 100 copies. 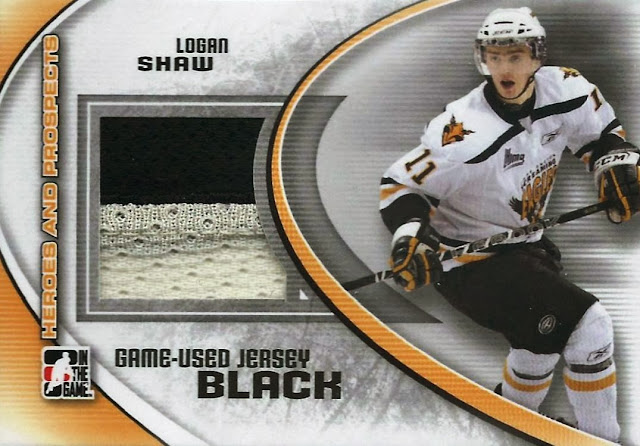 A bonus hit is always welcome and my bonus is a gem. The swatch is a nice seam piece featuring two colours from a Cape Breton Screaming Eagles jersey. Logan Shaw is my last game used hit and this swatch actually bulges out of the card. Logan was a Panthers’ pick from back in the 2011 NHL Entry draft and currently he is playing in the AHL with the San Antonio Rampage. While this isn’t a Huberdeau caliber hit, it is still very nice to end up with three game used cards in my box. All of these game used cards book for about 8 dollars apiece which is still a decent value considering the box price.

Each box should yield two autographs per box. ITG does a nice job merging the stickers which have the autos on them with the look of the card. All the card companies use auto stickers on some or all of their autograph products. Since it is difficult to have products ready for players to sign, many will sign sheets of stickers and then the stickers are applied to the cards when they are ready to be released. Some collectors dislike this practice while others are indifferent. As a result, sometimes there is a larger price premium on “on-card” autos.  Here are my two autographs: 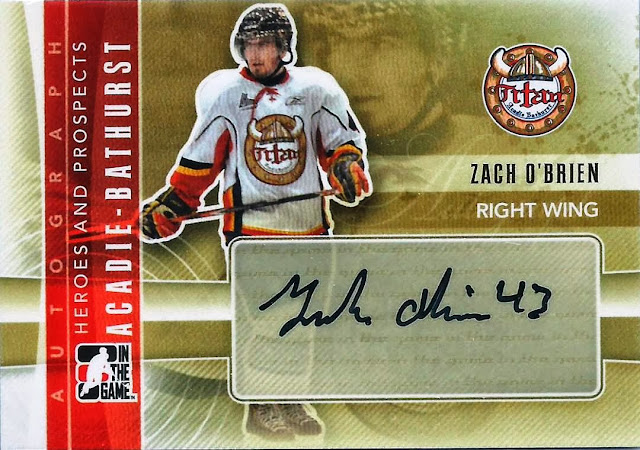 My first autograph is of Zach O’Brien. Despite scoring 97 goals and 193 points in the last two QMJHL season, Zach is an undrafted player. Zach recently tried out for the St. John’s Ice Caps in the AHL and was cut but seems to have found a home in the ECHL with the Ontario Reign. Given his size, 5’9”, and proficiency for offense, hard not compare him to Martin St. Louis and like Martin he could be a late bloomer.  Cards like this keep a collector prospect watching because you never know when a late bloomer will come in to his own. 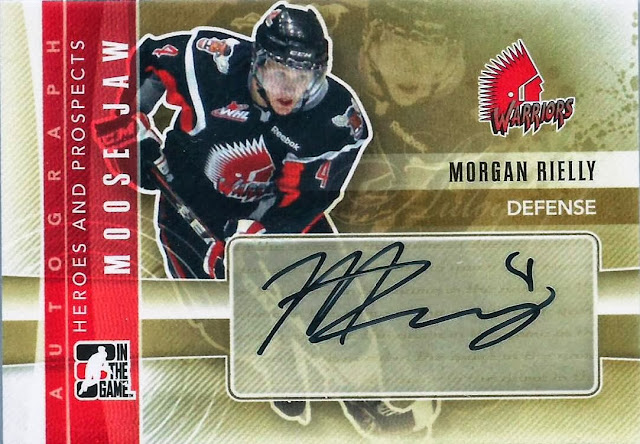 My last hit and auto of the box was the best hit in the box.  I ended up with blue-chip prospect Morgan Rielly. Morgan currently is playing for the Maple Leafs after being drafted 5th overall in 2012 and proving in training camp that he deserves a shot this season. I am sure he is more than willing to admit his first NHL game was a bit of a stinker, but given his age and talent I am sure that will be long forgotten by the time he hits his prime.

Well there you have it, a box of 2011-12 ITG Heroes and Prospects. You are certainly always going to get good value and loads of fun breaking a box of this stuff. ITG always does a great job making use of their different players’ licenses and their products are every bit as good as Upper Deck’s and Panini’s. However, due to that same lack of license, no official rookie cards and a smaller collection market are some dents in an otherwise solid product. Check out your local card shop and give a box a try, you won’t be disappointed.

For those interested at winning the Michael St. Croix Game Used Card, just leave a comment and say if you were and/or a card collector. That’s all it takes, I will randomly select a winner using random.org and list the winner in my next post.
Posted by Dirty Dangle at 12:01 AM
Email ThisBlogThis!Share to TwitterShare to FacebookShare to Pinterest