You know you are a good hockey player when the league makes a rule so that you can play. You know you are great when you can beat a Gretzky record that has stood for nearly 30 years. John Tavares is a player who has been in the hockey spotlight for nearly a decade and in that time he has grown from a 13-year-old kid playing in the OPJHL to one of Canada’s best forwards and the captain of the New York Islanders.

Like many hockey fans, I have been paying attention to Tavares ever since he was granted exceptional status and permitted to enter the 2005 OHL Priority Selection. Of course he ended up being selected first overall which would be a continuing trend when he went into the NHL first overall in the 2009 NHL Entry Draft. Being in the spotlight for such a long time has destroyed some young player’s careers, but John just seems to know how to take it in stride and each season so far he has only improved. Critics knocked his skating ability, so he got better. This past season I felt John has transitioned for a good player to a great player. Not only does he make Matt Moulson look good every night, but during the lock-out shortened season, Tavares nearly topped his career high of 31 goals in less than 60% of a full season. Based on his scoring pace last year, he could have had 48 goals in a full season if he maintained that pace throughout 82 games.

John’s growth has been noticed by Steve Yzerman and Hockey Canada because he was also included in the Olympic Orientation this past summer and many like Pierre LeBrun and TSN have him playing in Sochi this winter.

This autograph request was something I really hoped to get back and when I did it ended up being even cooler than expected. Typically when you write an autograph request, you generally include a return envelope with the appropriate postage so all the player needs to do is drop it off in the mail and the rest is taken care of. I even use self-sealing envelopes so the players don’t need to even worry about the envelope closing. However, this return which took nearly a year, and really was one I didn't have much hope for. However sure enough one day I get an envelope back, but what is strange is the stamps on the envelope are Canadian, and they are placed over-top of a pair of American stamps.

I had sent my request via the New York Islanders which I knew would be an American departure coming back to Canada so I used some of my special ordered USPS stamps. However, it turns out; John took all of his fan mail home with him in the summer and mailed them from Toronto. This meant that he had to re-stamp my return envelope with Canadian postage, so in effect John Tavares paid for my autographs to return home! I was really impressed that he would have gone through all that trouble for a fan. Here are the results of my request. 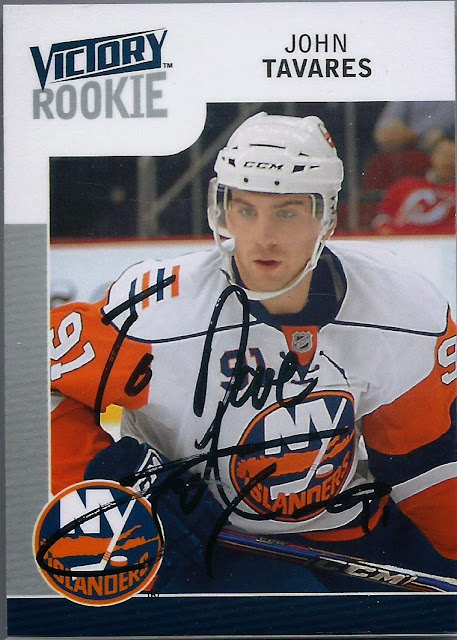 This first card is a low-end rookie card of his. I don’t have many high-end cards of his and knowing there is a risk I wouldn’t get them back I decided to play it cautious. The book value on this is about $10 without the autograph. I really like that he personalized it! 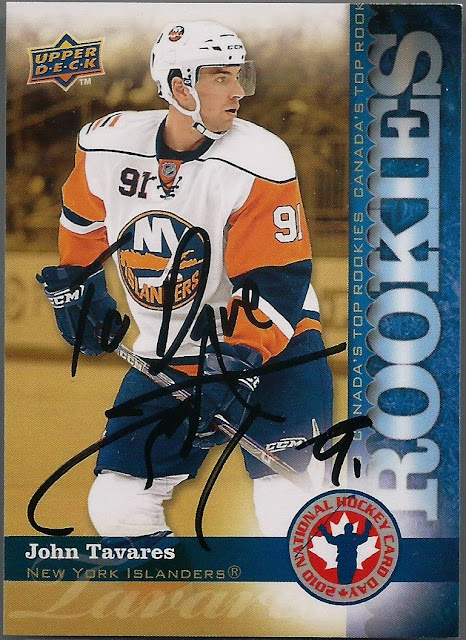 The second is a card from the Upper Deck Hockey Card Day in Canada which happens every February. Upper Deck gives out free packs via dealers and their hope is to reward current collectors and gain new ones through the gesture. I usually try and get a few packs myself and I mailed this away and he signed it too. While it isn't a true rookie card, it is another one from his rookie year and he personalized it like the first one. Book value on this card is a few bucks but both being sign and the story to go with it is priceless. I especially enjoyed this return and I am a bigger fan of John as a result.

Posted by Dirty Dangle at 5:48 AM
Email ThisBlogThis!Share to TwitterShare to FacebookShare to Pinterest