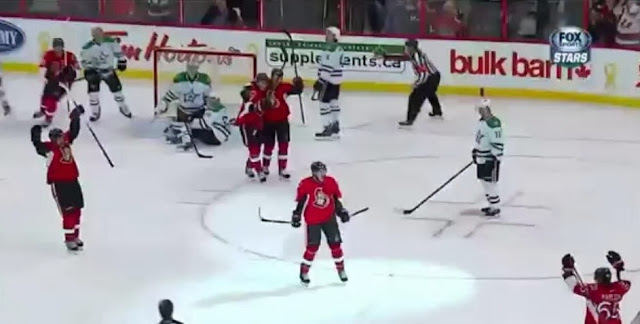 Bobby Ryan scored the hockey equivalent to a broken bat homerun today as he evened the score against the Dallas Stars with 10 seconds left on the clock. With the extra attacker on the ice, Ryan found himself alone in the slot for a one-timer and had his stick snap 3/4 of the way up the shaft as he shot. We've seen some frustrating stick breaks in those instances that usually end up in a blown chance to score, but Ryan's found its way through Vernon Fiddler and Kari Lethonen's legs for the goal. The only thing we're disappointed about is that Ryan didn't do a TMNT Leonardo cele:


It was still a decent shot and with a little luck it ended up in the net, but if you remember what Ryan did with Mikko Koivu's stick in 2010 then you can't be too surprised:


Yep, that's a right-handed shot scoring with a left-handed stick on a one-timer. Incredible. And for shits and giggles here's his amazing playoff goal against the Nashville Predators:

Posted by Dirty Dangle at 5:23 PM
Email ThisBlogThis!Share to TwitterShare to FacebookShare to Pinterest