How Bright Is The Sabres Future?

This is a guest post by our brother, Jonas. He watches plenty of puck and loves to talk shop
over a few beers so we thought we'd let him contribute his thoughts on Dirty Dangle.

The majority of hockey fans can agree that the Buffalo Sabres will be in the bottom of the standings when the regular season comes to a close in April. This should set Buffalo up for a top draft pick in 2014 and at the rate they're going we wouldn't be surprised if they were in the 2015 lottery as well. We can draw comparisons to other teams such as Pittsburgh, Chicago, and more recently the Edmonton Oilers who built their current rosters through the draft, but that means sucking for the better part of a decade.

In Buffalo, the rebuild has technically already begun with the departure of Derek Roy in July 2012, the trading of their captain, Jason Pominville at the 2013 trade deadline, and the firing of their long time coach, Lindy Ruff. This season, the plan to rebuild through the draft remains true with Thomas Vanek being traded to the New York Islanders in exchange for Matt Moulson, a first round pick in either 2014 or 2015 and a 2nd round pick in the 2015 NHL Draft. Next on the chopping block is net minder, Ryan Miller, who just hasn’t been the same since Sidney Crosby scored the golden….well you know where I am going with that. Miller will be an unrestricted free agent at the end of the season and it has been widely speculated that he will be traded at some point with draft picks coming Buffalo’s way.

It's probably pretty hard to be a Sabres fan right now as the highlight of their season is winning a game against a top team in which they should have lost, but on the bright side their team should be competitive in a few years with a stocked cupboard of prospects.

Currently, the Sabres have two young, full-time players that come to mind when you think of their future. Tyler Myers and Cody Hodgson. While Myers is struggling right now, remember he is still young and there's plenty of time for him to return to his rookie season form where he tallied 48 points in 82 games. That season was good enough for him to win the Calder Memorial Trophy and become just the 10th d-man to win the award. Hodgson, who came over in a trade with Vancouver put up career highs in a shortened 48-game season is currently leading the team in goals and points with 5 and 13 respectively. Buffalo showed their faith in the young centre this past offseason by resigning him to a 6-year deal worth $25.5M. Both Myers and Hodgson are just 23-years-old and signed with the Sabres until 2019 so you can bet they'll be core guys going forward.

The Sabres also have a stockpile of young players ready to make the transition to the NHL. Just in the past two NHL Drafts alone the Sabres have had four 1st round picks and four 2nd round picks. With those picks they selected: Rasmus Ristolainen, Nikita Zadorov, J.T. Compher, Connor Hurley, Justin Bailey, Mikhail Grigorenko, Zemgus Girgensons, and Jake McCabe. Also worth mentioning is forward, Joel Armia, who was drafted 16th overall in the 2011 NHL Draft. He is currently recovering from a broken hand and will need time in the AHL before he gets a chance with the big club. Keep in mind, all these players are 20 years of age or younger so be patient with their development and look to see them in the Sabres lineup for the coming years. For what it's worth, Hockey's Future has the Sabres propect pool ranked 2nd in the league in their most recent rankings, and it should be #1 next year when they draft Top 5.

If building through the draft isn’t evident already with the Sabres, they will continue gathering young prospects in the next two drafts. The 2014 and 2015 drafts should be fun to watch as the Sabres have three 1st round picks and six 2nd round picks. If they trade Ryan Miller and even the newly acquired, Matt Moulson, than they could be looking at five 1st rounders in the next two drafts. Looking at some of the young prospects that could potentially be impact players for the Sabres franchise in these upcoming drafts has to make even the most depressed Sabres fan smile. In this upcoming 2014 NHL Draft there is Sam Reinhart, Aaron Ekblad, and Michael Dal Colle as top picks while the 2015 NHL Draft will be all about the Connor McDavid sweepstakes.


The goaltending issue in Buffalo is probably the hottest topic right now. It is only a matter of time until Ryan Miller is traded away and the Sabres will have successfully dealt all their movable assets. When Miller is traded, it looks like Jhonas Enroth will get a chance to play more games and possibly help Buffalo lose more games, but more importantly, goalie prospect Matt Hackett should finally get his chance to prove he can be a regular in the show. Hackett is currently playing for the Rochester Americans and will most likely be called up once Mr. Miller says goodbye to Buffalo.

If your a Sabres fan you should start rosterbating to the team's prospect pool as it gets even deeper with some top picks coming your way. It will also make watching defence like this more bearable knowing what the future holds: 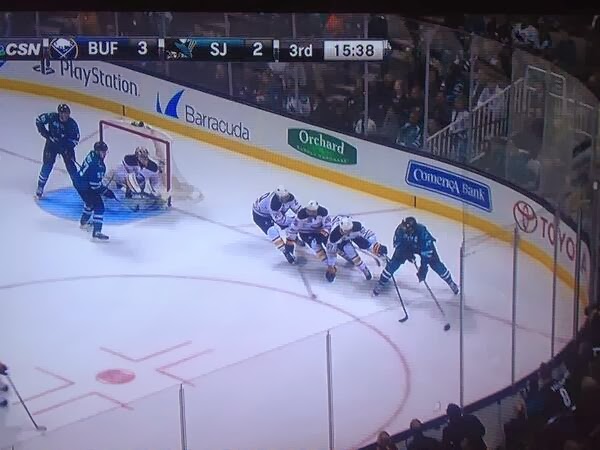 Posted by Dirty Dangle at 8:22 PM
Email ThisBlogThis!Share to TwitterShare to FacebookShare to Pinterest