It's been a while since we have had a cup of coffee here at Dirty Dangle so this week let’s have a cup. In my first cup of coffee post I defined a cup of coffee as being a player whose NHL career consisted of less than a full season (80 games).  Normally it is hard to consider a player who has never actually played an official regular season game as being noteworthy; I think we can make an exception here for Manon Rheaume.

Manon was the first and only female hockey player to ever appear in an NHL game. What some don’t realize is she was also the first female to play in a Major Junior Game (Trois-Rivières Draveurs of the QMJHL) and she appeared in a number of pro games in the ECHL and the IHL. Many view each of these as being nothing more than publicity stunts, there is no hiding she did have some talent.

Like many boys growing up in the 90’s; I am not ashamed to admit I thought that she was pretty cute and wished girls who looked liked her played on my hockey team. I even cheered and hoped against all odds that she would crack a line-up somewhere and play pro hockey. Alas, none of that really happened and most of her appearances were really nothing more than publicity stunts. With that being said, she was a very legitimate player in the female world and her list of accolades there are very impressive. Manon won silver with Canada at the 1998 Olympics and two gold medals at the World Championships in 92 and 94.

At the height of her popularity there were a few companies in the hockey card industry who tried to capitalize on her celebrity and they included her in their sets. This post includes her autograph from Classic’s Hockey Draft 95 set. 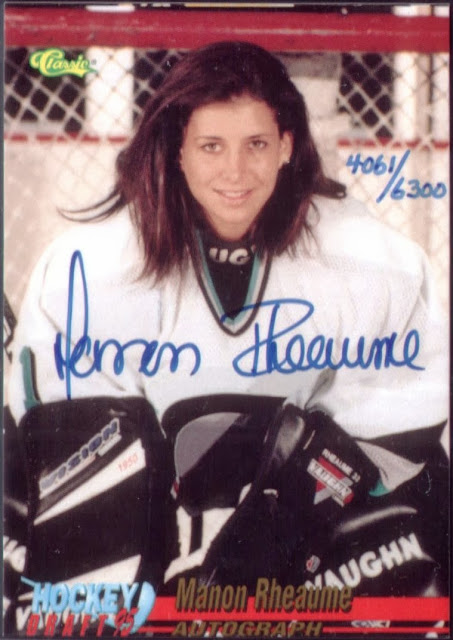 As you can see, Manon is in goal without her helmet wearing her Las Vegas Thunder jersey. The card is autographed and numbered to a mere 6300 copies. Despite the crazy print run (large by today’s standards) this card does book for about 50-60 dollars. With that being said, there are many of her autos available online and they can be had for 15-20 dollars. Upper Deck, Panini and ITG all have recent releases which have her autograph inserted in their product and feature her with the Tampa Bay Lightning or Team Canada.

It may seem insane to pay that much money for a player who really never even had a Cup of Coffee in the NHL but then again when you say her name I am positive more people would recognize her name over a former 60 goal scorer like Denis Maruk or NHL HOF’ers like Edgar Laprade, Fern Flaman and Bob Pulford. The fact of the matter is the media plays a huge role in celebrity and that extends itself to hockey. Manon was a trailblazer and women’s hockey world wide benefited from the exposure. While a female may never play in the NHL again, there are more countries than ever playing women’s hockey and Manon’s crazy ride was a part of that growth.

Last post I featured a box break and a Michael St. Croix card was going to be given away. Well I used random.org with all the entries and 1967ers was the winner. Please send me an email to forestrydave (at) hotmail.com and I will mail it off to you!
Posted by Dirty Dangle at 12:30 AM
Email ThisBlogThis!Share to TwitterShare to FacebookShare to Pinterest