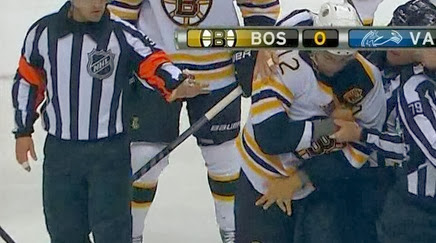 No, that's not Jarome Iginla doing the Vulcan salute. I'm no doctor, but that looks dislocated. After delivering a solid hit on Ryan Kesler, Iggy got the shinpad tap and dropped the gloves in what would be a pretty entertaining fight with the Canucks forward:

Both exchanged some pretty good punches off each other's visors and Iginla came out of the fight with his finger going in a direction it's not supposed to. It could have been one of the uppercuts he gave Kesler at the end of the fight or could have happened earlier in the scrap meaning Iginla still landed some punches with a broken finger. Pretty badass. Even more badass is the fact that Iginla returned to finish out the game and even tried to fight Canucks defenceman, Dan Hamhuis, after receiving an elbow near the goal mouth.

Posted by Dirty Dangle at 11:50 AM
Email ThisBlogThis!Share to TwitterShare to FacebookShare to Pinterest