Looking At The 2014 US Olympic Team 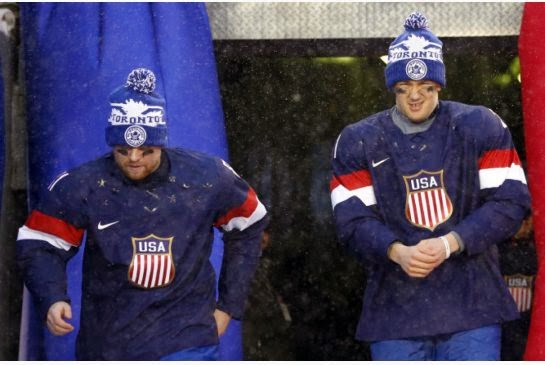 David Poile and Team USA announced their roster for the 2014 Sochi Olympics following the Winter Classic today and while there were some notable omissions the team's core was pretty easy to predict. With plenty of offensive talent up front the US should have no trouble scoring goals, nor should they have any trouble stopping pucks with arguably the best goaltending on paper. The biggest surprises come on defence as a lot of new faces are set to patrol the US blueline in February.

With that said, here's the US roster and some notable omissions:


Those are some pretty solid names with two phenomenal scoring lines and one hell of a shutdown line in Brown-Backes-Callahan. Slide in Stastny or Wheeler anywhere on that fourth line and you have another tough line to play against with those bottom-six trios most likely getting plenty of time against opponent's top scoring threats. The US will not be able to use lack of forward depth as an excuse by any means with the 2nd best forwards on paper in the tournament.

Since the 2009-2010 season, Bobby Ryan has the 2nd most goals scored of all American-born players with 129. Of those 129 goals, 99 were at even strength, first among all US skaters and it's no surprise he has one of the highest shooting percentages in that time span. He's a natural goal scorer who's having a great season with 18 goals and 18 assists. Quite the shocker he didn't make it. Kyle Okposo has the 2nd most points among Americans this season, but he won't get to play John Tavares at the Olympics nor is he built for big ice so it's not that surprising that he's left off. Saad was a late cut for the team and while he's probably sad he didn't make it, he's 21-years-old and should be a lock in 2018 if he continues to grow as a player.


A lot of new additions to the US blueline with only Brooks Orpik and Ryan Suter returning from the Vancouver Olympics . They'll have plenty of youth with Faulk (21-years-old), Fowler (22), Carlson (23),  McDonagh (24), Shattenkirk (24) joining the team along with old man, Paul Martin (32).

It was interesting to read Scott Burnside's behind-the-scenes look at the selection process for the US team as Jack Johnson was considered a lock in August and Erik Johnson was off "The Board." Two months into the season and Jack Johnson found himself no longer a lock and ultimately off the team. Keith Yandle wasn't getting much love from a majority of the US management despite being the highest scoring American d-man since the 2009-10 season with 200 points and Dustin Byfuglien was just too high-risk for the team to take.


Jonathan Quick was a lock for the squad as the best American goalie out there and remained in that position despite only playing 16 games this season due to a groin injury suffered in November. He'll be back soon, but will have some competition if Ryan Miller has a say in it. Miller's been facing plenty of rubber this season on a Sabres team Brian Burke calls a "train wreck" and finished the month of December as one of the best goalies in the league with a 1.82 GAA and .948 save percentage. Howard might not even play in Sochi as the #3 goalie, but he's got the playoff experience to provide some leadership in the dressing room.

Not Returning From 2010: Tim Thomas

Bishop has the best numbers among American goaltenders this season, but his lack of big game experience and poor play for the US at the 2013 World Hockey Championships cost him the 3rd spot to Howard. Anderson and Schneider definitely garnered consideration before the season, but injuries and sharing time with their backups as a result of poor performances ultimately left them off the squad.

Overall, this team is a medal contender who's strengths will be in the crease and from their
Posted by Dirty Dangle at 7:05 PM
Email ThisBlogThis!Share to TwitterShare to FacebookShare to Pinterest