Back in June of 2012, the Toronto Maple Leafs took a chance and drafted a kid who was a -72 on an absolutely terrible Erie Otters team that year. It looks like that 6th round, 156th overall pick was a Detroit Red Wingian steal as Connor Brown not only dominated the OHL scoring race, but won the Canadian Hockey League's Top Scorer Award this week with 45 goals and 128 points in 68 games.

Brown had a dynamite offensive season playing alongside Dane Fox and 17-year-old phenom, Connor McDavid. Brown won the OHL scoring title with a 21-point lead over Fox, and the Otters line missed out on a 1-2-3 finish as McDavid finished 1-point behind Guelph Storm sniper, Scott Kosmachuk, who played in 12 more games. The last Maple Leaf prospect to win the Eddie Powers Memorial Trophy for top OHL scorer was Kyle Wellwood who won it back in 2001 with 118 points. Let's hope Brown stays away from the cheeseburgers and has a better pro career than Wellwood.

Brown is the first Maple Leaf prospect to ever win the CHL Top Scorer Award that has been given out since 1994 to the player that has the most points out of the OHL, WHL and the QMJHL. 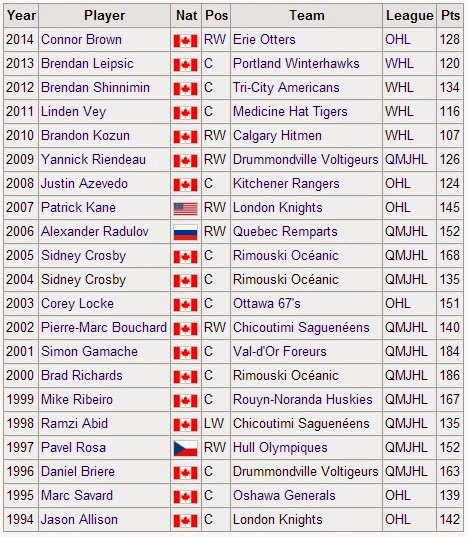 As you will see there are some studs on this list and quite a few duds. Putting up points in junior doesn't always mean success in the pros or even a guaranteed ticket to the NHL. Just look at current Maple Leafs farmhand, Brandon Kozun, who won the award back in 2010 when he put up 107 points. He has been a decent AHL player so far, but still hasn't played a single NHL game and might not ever. Give props to Brown for a stellar season in which he nearly doubled his point total from the previous season, but don't expect him to be the next Patrick Kane as he could just easily be another dud on this list of top junior scorers.


Posted by Dirty Dangle at 11:14 PM
Email ThisBlogThis!Share to TwitterShare to FacebookShare to Pinterest