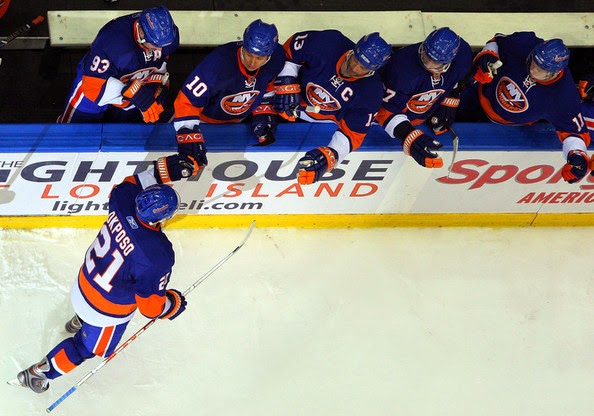 We're not talking about the real undrafted gems of the NHL such as Marty St. Louis and Adam Oates, we're talking about the guys that saved your fantasy season when you picked them up as free agents following your draft. These players might have been on your radar to start the season and depending on the depth of your league you might have even drafted them late, but the majority of people caught their hot starts and snatched them up early. Regardless, these players have made fellow fantasy hockey GMs weep at their success and feel like idiots for not picking them up first.

Here are some of the undrafted fantasy gems available in most leagues early on:

Okposo is having a career season and ended up being a Top 50 fantasy player thanks to 27 goals and 69 points through 71 games. Besides a negative +/-, all of Okposo's other stats are great with 51 PIMs, 15 powerplay points and 195 shots on goal. Had John Tavares not gone down with injury those numbers would be even higher, but he still continued to do well without him to cap a great fantasy year.

Bishop has had an unbelievable season and you could have had a Vezina candidate from the get-go. In 61 starts, Bishop has 37 wins and some of the leagues best numbers with a 2.18 GAA and .926 SV% so far. Throw in Bishop's 5 shutouts and you have the 2nd best fantasy hockey goalie this year behind Tuukka Rask. Goalies are so valuable in fantasy hockey and to get one with these numbers off the waiver wire just doesn't seem fair.

Many Leafs fans saw this coming as MacArthur left Toronto to do well in Ottawa. With 24 goals and 54 points, MacArthur has shown flashes of his career high 62-point season back in 2010-11 with Toronto. Throw in MacArthur's 15 powerplay points, +14 rating, and 74 PIMs and you've got a Top 50 fantasy steal and heartbreak for Toronto who let him go for nothing.

Due to the Penguins injure woes, Niskanen gained more powerplay time this season and rose to the occasion as Sidney Crosby's breakout passer. Niskanen was one of the top fantasy d-men this year with a career high 10 goals and 42 points so far. While those stats might not jump out at you for a top fantasy d-men, when you include his +33 rating, 51 PIMs and 14 powerplay points he becomes one of the top fantasy players this season.

After a not so breakout season last year in which he put up 13 points in 45 games, Schwartz exploded this year and like virtually every St. Louis Blues player he became a must-have fantasy player. Thru 74 games this season, Schwartz has 23 goals, 54 points, and a +28 rating to make for a beautiful stat line on a guy you should have picked up in November.

The little Norweigan has had a career season to end up in the top 80 fantasy players. With 17 goals and 55 points including 17 with the man advantage, Zuccarello had guys scrambling to pick him as he put an impressive 36 points in 44 games from November-January. Zucc's +12 rating, 30 PIMs, and 158 SOGs don't hurt your stats either.

What a year for the emerging Blue Jacket who's potted 30 goals and 25 assists already in his 3rd NHL season. After putting up just 12 points in 40 games last year he went undrafted in many fantasy leagues, but had a great November with 7 goals and 12 points that caught the eye of fantasy GMs. Johansen has 213 shots on goal, 43 PIMs, and 15 powerplay points thus far and those stats will do just fine on my fantasy squad.

Most people probably didn't even know who he was, but Palat stepped up this season and has earned some Calder consideration for his efforts. Most likely not on the radar until 2014 where he's scored 39 of his 54 points (including 16 points in both the months of January and March), Palat has done the majority of his scoring at even strength to earn a +28 rating. Not bad for a guy who's name you probably can't pronounce.

Not many saw Filppula scoring a career high 25 goals this year, but the former Red Wing has made his mark in Tampa by putting up 57 points so far including 19 via the powerplay. One of our favourite things about him this year was his C/LW designation and the fact that he put up most of his points without Stamkos and St. Louis having their names on the scoring line.

Khudobin got his chance when Cam Ward went down with injury and he hasn't disappointed with 18 wins in 31 starts. The former Bruins backup has great numbers too with a 2.15 GAA and .931 SV% while playing his strongest in the new year including a 10-win month of January. Despite limited games played, Khudobin's numbers are too great to ignore especially in recent months when fantasy hockey ramps up.

If you remember Krug's goal scoring in the playoffs last year you might have taken a gamble and drafted him late. If not, you definitely tried to pick the young d-man up as he's currently got 14 goals and 37 points to lead all rookie defencemen in scoring. With plenty of PP time he's put up 18 extra-man points and his 177 shots on goal make him one of biggest defensive shot takers in the NHL. Don't forget that Krug is also a Bruin so of course he's +17.

You're probably kicking yourself for not being the first guy to pick this Swedish stud up as he's been on fire in the year 2014. With 28 goals and 18 assists on the season (most of which came in the past 3 months), Nyquist is one of the highest goal scoring undrafted fantasy guys. He's stepped up to help the Red Wings into a playoff position and likely did the same for your fantasy team down the stretch.

What a surprise as another Tampa player is having a breakout year. Killorn has put up 17 goals and 23 assists thus far. While his 7 PPP, +9, and 166 SOGs aren't as strong as his other sleeper pick teammates, Killorn has put up 61 PIMs to increase his fantasy stock as a Top 150 fantasy player with that all so valuable C/LW designation.

Despite only 26 starts, Harding's numbers could have easily made a difference in your season as they were that spectacular. Thanks to his 18 wins and 3 shutouts in that stretch he played, the Wild were able to save their season early on when Niklas Backstrom went down with injury. Harding's 1.66 GAA and .933 SV% are still league best numbers and we wish Harding the best on his recovery.

You might have found yourself skipping over Carolina Hurricanes boxscores and noticed Sekera's name popping up on the scoresheet quite frequently. With 11 goals and 44 points including 15 on the powerplay, Sekera has been a pleasant fantasy surprise and one of the bright spots on a struggling Hurricanes team. Getting a defenceman having a career season for free off the waiver wire seems like a steal to us.

A perfect sleeper pick from the Tyler Seguin trade, Smith has had a solid year with 19 goals and 49 points this season playing with Patrice Bergeron and Brad Marchand. While he doesn't shoot as much as fantasy GMs would hope with 137 SOGs, his +24 and 13 powerplay points make up for that category. Keep this kid in mind when you're picking your playoff fantasy team as he and the Bruins are good for a few playoff rounds.

Never a bad idea to get a great team's backup goalie and Chad Johnson of the Bruins didn't disappoint. In 21 starts so far this season he's got 17 wins and 2 shutouts. Wins are so hard to come by and to get 17 of them from a free agent pickup who only burned up 21 starts is amazing. A sparkling 2.12 GAA and .923 SV% make you wonder if it's just Tuukka Rask wearing a different jersey.

Bonino is starting to resemble the player that played in Italy's 2nd Division during the lockout as he's already scored more goals and points this season than his previous 4 seasons combined. 20 goals and 47 points are great for a guy seeing just over 16 mins/game, but it's his powerplay production that has made him so valuable with 20 powerplay points on the year. Keep an eye on Bonino for your playoff pool as he's currently playing on the top line with Getzlaf and Perry.

It may have been frustrating to hang on to Gelinas as he bounced up and down between New Jersey and Albany in the AHL, but he's been worth hanging on to. With 28 points including 17 on the powerplay, Gelinas has done very well for himself in 57 games as a rookie. He's been consistent when up and is tied for the Devils powerplay scoring despite playing in fewer games.

So many things to love about this kid's fantasy year. With 23 goals and 48 points so far, Johnson has scored in all situations for the Lightning including a league leading 6 shorthanded points and 10 on the powerplay. With a +20 rating, Johnson did his most damage playing with Ondrej Palat and Marty St. Louis and continues to have a strong rookie campaign that could earn him some Calder consideration.

Posted by Dirty Dangle at 2:30 PM
Email ThisBlogThis!Share to TwitterShare to FacebookShare to Pinterest