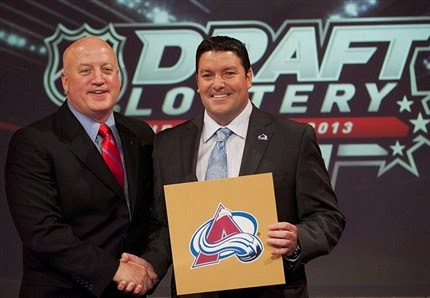 Since 1995, the lottery has been in place and we've seen quite a bit drama surrounding the event with team's winning the lottery and selecting picks that would alter their franchise for years to come.

The Atlanta Thrashers finished last in 1999-2000 with a 14-57-7-4 record, but were beat out of the top pick in the lottery by the Isles who jumped two spots in the 2000 NHL Draft. With that pick they selected goaltender Rick DiPietro. In his first four seasons DiPietro's best single season save percentage would top out at .911, but that would be enough for a 15 year, $67.5M contract extension. He was often injured and poor play led to an eventual buyout last season that will net him $1.5M a year until 2029. The Isles are one of those lottery winner disasters who go bankrupt after a few years and now live in a trailer with 14 cats. Man, they were SO excited to take him too:

In a revengeful twist, the Thrashers won the lottery the following year while the Islanders finished last in the NHL with a 21-51-7-3 record. Atlanta did the right thing by taking Ilya Kovalchuk in that 2001 NHL Draft as he would finish as the team's all-time leading scorer with 328 goals and 615 points in 594 games played before being traded away for pretty much nothing. Kovalchuk made it to the playoffs just once with the Thrashers and has now found employment close to home in the KHL. Kovy was a solid player and an elite goal scorer, but he was not a saviour for the franchise as even his fame could not keep the team in Atlanta. This lottery win is comparable to marrying someone without a prenup after winning the lottery and watching them walk away with everything a few years later.

The Capitals finished 3rd last in 2003-04, but managed to win the lottery and grab The Great 8 at 1st overall. Ovechkin brought new life to Washington and since the 2004-05 Lockout he's been the top goal scorer in the NHL by over 100 goals. It's hard to imagine Ovechkin in any other jersey now and he's been one of hockey's biggest personalities since entering the league. Washington winning this lottery definitely changed their fortunes as they've won 5 Southeast Division titles and made the playoffs 6 times in the Ovi Era. The Caps are definitely happy with their lottery win 10 years ago, but were hoping their future would be full of more team hardware rather than individual.

Every team had a chance at Sid thanks to a weighted lottery system with no previous season due to a lockout, but Buffalo, Columbus, the New York Rangers, and Pittsburgh had the best odds going in. Pittsburgh came out on top thanks to being so consistently terrible the previous seasons and having Washington win the previous lottery (what a twist!). Since he's entered the league, Crosby has the best points-per-game and sits 3rd in scoring despite missing over 100 games with a concussion. With their lottery win the Pens got a generational player that has led them to two Stanley Cup Finals and one Stanley Cup. A team down on their luck struck gold and changed their franchise for many years to come in a true rags to riches story.

Remember when Philly and Chicago were terrible? Well both finished at the bottom of the league in 2006-07, but Chicago beat out the Flyers for the #1 overall pick and selected Patrick Kane. The Flyers had to settle for James van Riemsdyk who they then flipped for Luke Schenn a few years later. Since Kane's arrival in the NHL the Hawks have won two Stanley Cups and seen Kane take home the Calder Memorial Trophy as top rookie in 2007-08 as well as the Conn Smythe Trophy as playoff MVP in 2013. A great lottery win for the Hawks who have successfully built a dynasty around Kane who despite negative publicity in recent years for partying too hard like most lottery winners face, as become an NHL superstar.

Edmonton had a nice stretch of picking 1st overall for three straight years thanks to two last place finishes and 1 lottery win that bumped them ahead of Columbus in 2012. With those picks they selected Taylor Hall, Ryan Nugent-Hopkins, and Nail Yakupov. Hall is on the verge of superstar status, The Nuge is still only 20-years-old, and Yakupov can't seem to find his way into the lineup some nights. The Oilers are like that lottery winner who wins multiple times, but only the small prizes, never the big jackpot. They'll have a chance at winning their 3rd lottery and picking 1st overall for the 4th time in 5 years tomorrow as they sit with a 14.2% chance of winning the lottery.

The Florida Panthers finished last in 2012-13, but Colorado came out on top in the lottery and selected current Calder Trophy favourite, Nate MacKinnon. Many predicted the Avalanche to finish near the bottom of the league this year, but the Second Son of Cole Habour has helped lead them to the playoffs with home ice no less as the Western Conference regular season champs. MacKinnon is the first NHL rookie to hit the 60-point mark since Jeff Skinner in 2011 and at only age 18 as shown signs of super stardom. It might be too early to see how the lottery changed their fortunes, but it's looking pretty for the Avalance now.