It's funny how NHL prospects can go from being the next big thing to a buried prospect on his way to Bustville. Okay, maybe it's not that funny if this prospect is a member of your franchise, but every NHL team has different needs and a prospect could find themselves as an 18-year-old playing opening night or a 23-year-old waiting for a roster spot to open up. Every year there is new group of young, hotshot prospects coming in and new free agents taking up roster spots. Getting drafted is hard enough, but being able to lock down a full time NHL spot is the real challenge.

In our first installment of Bustville let's take a look at Brett Connolly.

Drafted by the Tampa Lightning at 6th overall in 2010, the now 22-year-old has struggled to crack the Bolts line up.

Connolly was given a chance to prove his worth during the 2011-12 season when he suited up for 68 games and put up just 4 goals and 15 points playing a 3rd or 4th line role and averaging 11:28 TOI a night. Connolly was also loaned to Team Canada for the World Juniors that December and scored 5 goals and added an assist in 6 games. He was still a promising prospect that needed some time to develop and work on his NHL game.

The following season he spent most of the time in the AHL before getting a late call up in the season and playing 5 games. During that AHL season with Syracuse, Connolly had a strong season with 31 goals and 32 assists in 71 games to finish 2nd in goals and points on his team to 2013-14 Calder Trophy nominee, Tyler Johnson. For the 2013-14 season, Connolly was once again mostly playing in the AHL and scored 21 goals and 57 points in 66 games. Solid offensive numbers in the AHL, but Connolly disappointed in his 11 NHL games scoring just 1 once and being a minus -5.

2014-15 will be a huge season for Connolly as he needs to impress right away at training camp or find himself back in the AHL. Tampa Bay already has a pretty good looking forward group with other prospects leapfrogging Connolly in the depth charts over the past two years and don't forget about Jonathan Drouin ready to take a spot this year. The Brenden Morrow signing doesn't make it any easier for Connolly either. 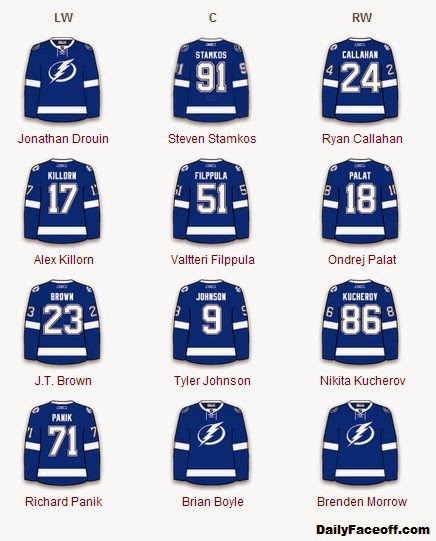 We aren't going to give Connolly his train ticket to Bustville just yet, but what he needs is a trade to an organization starved for offence. He has all the offensive tools and with top six minutes should be able to produce 25 goals a season and be a solid secondary scorer. Similar to Brandon Pirri finding himself in a good position in Florida at the end of last season, Connolly needs a new home and wouldn't cost that much to acquire. There's a few teams that could make this low risk-high reward trade and jump start Connolly's once promising career.
Posted by Dirty Dangle at 5:09 PM
Email ThisBlogThis!Share to TwitterShare to FacebookShare to Pinterest