Who Are Future Hall Of Famers? We were having a good chat at the pub the other night about the upcoming Hockey Hall of Fame inductions before the conversation shifted to how some young guys in the NHL already have Hall of Fame resumes. A player like Jonathan Toews has already accomplished so much in 7 seasons that he will be a shoo-in for the Hockey Hall of Fame whenever his career is over. This got us thinking about what other young players like Toews are on the HHOF track and might be getting the call in 15 or so years to join some elite company.

How Low Will The Buffalo Sabres Go? 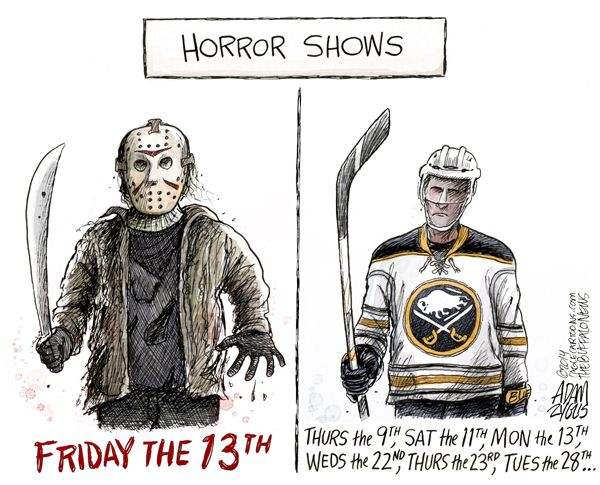 While they might not sit dead last in the NHL just yet with 3 more games played than the Carolina Hurricanes, make no mistake, the Buffalo Sabres are the worst team in the league and it's not even close. Last year, the Sabres had the worst record in the three-point game era going 21-51-10 with 52 points. This year, they could go even lower.

Read more »
Posted by Dirty Dangle at 1:35 AM 1 comments
Email ThisBlogThis!Share to TwitterShare to FacebookShare to Pinterest

Stat Geek: 5 Early Stats That May Surprise You

It's Monday at work and for me that usually means some time to research my fantasy hockey pools and spend an hour or so checking out hockey stats. Often when I do this I find myself doing doubletakes because it's hard to believe a stat I'm looking at is real. If you actually have a real job and can't check hockey stats all day, I managed to do some work for you before my boss came in and I had to stop. Sorry Kevin, I'll finish that assignment tomorrow.

It's been almost a year since our favourite YouTube account has uploaded video of NHLers playing in their youth hockey days and they returned with a beauty. Here we have Johnny Gaudreau a.k.a. Johnny Hockey of the Calgary Flames playing for Boston in the 2003 Brick Invitational Super Novice Hockey Tournament as a 9-year-old. He doesn't look much bigger than he is now as a rookie in the NHL at 5'9", 150lbs, but you get to see Gaudreau's dangles that he is known for today.

Watch him go end-to-end and almost score before pulling a reverse Dougie Gilmour and burying a wraparound:

Posted by Dirty Dangle at 10:31 PM 1 comments
Email ThisBlogThis!Share to TwitterShare to FacebookShare to Pinterest

Connor McDavid Is Tearing Up The OHL The #1 ranked prospect for the 2015 NHL Entry Draft is off to an amazing start in his third season with the Erie Otters of the OHL. Through 14 games, Connor McDavid, has already amassed an OHL and CHL-leading 14 goals and 42 points. Averaging 3 points/game, McDavid is currently on pace for 204 points although that likely won't happen because the junior star is destined to miss a handful of games for the World Juniors in December and because scoring 3 points/game is ridiculous. If he does keep this pace up through ~55 games or even dip a little, McDavid will have some of the highest numbers in the CHL in over a decade and similar point totals to another teenage phenom - Sidney Crosby.