Best Bets & Sleepers Down The Stretch

We're finally approaching the first NHL All-Star Weekend since 2012 and what a first half of the season it's been as we hit the unofficial halfway-point of the NHL season. There's been more than a few surprises during the first half with many teams having outperformed their pre-season expectations and that is going to make for a very exciting finish to the 2014-15 campaign. It's always fun to look back at what the odds in September were and how drastically some have changed this far into the season. Having seen how teams have played with a half season's worth of games under their belt you can get a good feel for what teams might be hanging banners in their arenas next season. With that said, if you're into putting some money on NHL futures, there's some great ice hockey betting welcome offers from William Hill on the table to check out!

Let's take a look at some of the odds for how the standings will finish come April:

Starting with the divisions, you still have some tight races and plenty can change in the last two months with more divisional games being played allowing for some of those wild card sleepers to sneak in and win the division.

The Pacific Divison is the least enthralling of the four, but still one to watch with powerhouse teams waiting in the weeds.
Best Bet: Anaheim Ducks -700                       Sleeper: Los Angeles Kings

Looking at the broader picture, we have some interesting conference championship races to keep an eye on as well.

We're still big fans of Tampa to win the conference and you have to like them at +550 given their scoring and defensive depth. The Boston Bruins hold the 4th best odds despite sitting 8th in the conference and 7 points out, but they are surging and shaking off their early season rust. If any team can leapfrog up the standings it's the Bruins. The Islanders are looking like the real deal and at +750 they're worth the gamble. They're hot right now and finally John Tavares and Co. have some goaltending to win them games - it's a good mix for a potential conference champ. The Rangers catch our eye at +800, especially because we're liking them to win the Metropolitan Division. Just 6 points out of 1st in the East with games in hand? Why not sprinkle some coin on the blueshirts?

Just like the Central Division, this conference championship could belong to numerous teams. Chicago (+40), St. Louis (+37), and Nashville (+33) boast the 3 best goal differentials in the league and our money is on one of those three to win the conference at seasons end. The Preds have the best odds of the three and are worth a look while the Blues still remain our favourite to win the Central and beat out Chicago and Nashville. If you're a Winnipeg Jets fan and the ultimate believer then you're thrilled with +2800 odds. Take back your empties and throw that extra change down on them to do the unthinkable. 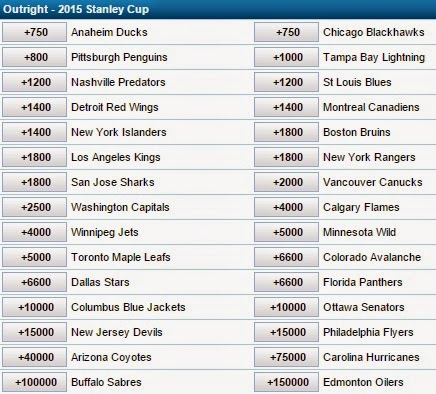 This year there seems to be more contenders than previous years for the Holy Grail of Hockey and we're liking four teams in particular. Chicago is the co-favourite and rightfully so. One goal away from making the Cup Final last year and most likely repeating if they had, the Hawks have a championship roster yet again. The St. Louis Blues simply look too good on paper to ignore as a legitimate contender and their play this season has us believing this could be their year. With three scoring lines and a star-studded blueline, the only question mark is in net. If they can get above average goaltending for two months they have the tools to win it all. We're still liking the Lightning and Rangers to emerge from the East and duel it out for the Conference Championship and both have great odds at +1000 and +1800 respectively. They're similar teams with great scoring depth and solid defence starting with their goaltenders. It's going to be a great finish to the season and if you picked your teams right you could be enjoying the playoffs with a heavier wallet!
Posted by Dirty Dangle at 8:07 AM
Email ThisBlogThis!Share to TwitterShare to FacebookShare to Pinterest