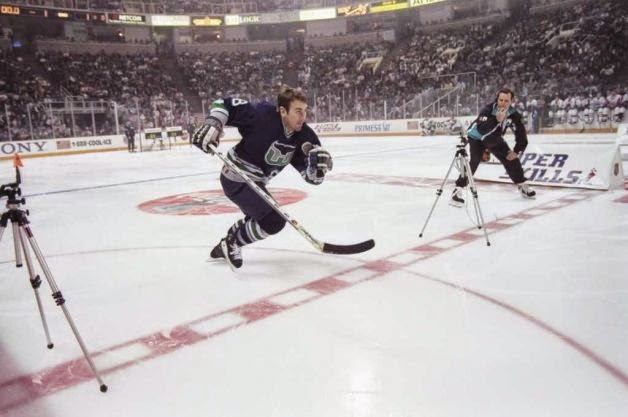 It's been over a week since the NHL All-Star Weekend and there were some surprising stats released last week in regards to TV ratings surrounding the entire weekend. The ratings crashed in both Canada and the US with the All-Star Game, Fantasy Draft and Skills Competition taking massive hits from past installments. The All-Star Game dropping is no real surprise and the Fantasy Draft is relatively new, but the NHL Skills Competition should be a marquee event for fans and a highlight on the NHL calendar.

It's been hard to watch what the NHL Skills Competition has become in recent years with classic events altered or dropped all together as the event is now a shadow of its glory days in the '90s. After watching highlights of other leagues skills competitions it's clear that the NHL needs to look at the success of others and turn back to the history of the event to reignite some excitement into the skills competition.

Let's do a rundown of the NHL's current skills competition events and get judgy:

Since 2012, two players have gone head-to-head going up and down the ice using tight turns. Previously, all skaters did a full lap of the ice and traveled in opposite directions making for a dramatic finish at centre ice. Starting in 2009 the NHL introduced defencemen skating backwards and even had goalies race against each other. These were fun adds (although they only lasted two years) and we still had the skaters doing a full lap as they've done since 1992. Unfortunately, we're stuck with this ridiculous version now and have lost the great full lap battles and the chance of someone beating Mike Gartner's historic time of 13.386 seconds.

HOW TO FIX IT: Bring back the full lap around the ice with five heats of participants going head-to-head. Three heats of skaters going forward, one heat of defencemen skating backwards, and one heat of goalies skating. You get back the history and a chance for today's NHLers to break records - maybe even superimpose Mike Gartner's fastest skate or project him on the ice so today's stars are "racing him" and history. With the backwards skating and goaltenders participating you still have the fun additions and who doesn't love seeing a goalie trying to move as fast as they can while wearing gigantic pillows.

Trick shots and fun as six skaters attempt to replicate the NBA's Slam Dunk Contest on ice with a puck. Unfortunately, this year was a dud compared to the past with many trick shots failing and many of the attempted trick shots not even that great to start. While there some props: a kid, another kid (Johnny Gaudeau), and a college football jersey, the event could be improved by allowing for contestants to showcase some creativity. If Johnny Hockey wants to light his stick on fire, let Johnny Hockey light his stick on fire (I bet the KHL would have let him).

HOW TO FIX IT: You're limited to moves to beat a single goaltender so why not add some d-men to dangle and add to the entertainment. Let some players kids (or the Leafs d-men) go out there to act as moving pylons and give the players more chances to dazzle. Give the players a set time to work their routine (this was unofficially done with Alex Ovechkin's baseball swings attempted this year) so if they want to do a tornado lacrosse goal like we saw in the KHL they can without fear of missing it on one attempt. Lastly, the voting should be tweaked as fans can't be trusted to vote (or just don't have hometown players in the event). Bring back some former All-Stars or hometown celebrities and have them judge like back in the event's inception.

This event became all about speed in 2011 and it seems the players are just getting worse at it. The highlight of the event is seeing targets shatter and sometimes you can't even tell if a target has been hit because they don't blow up. It's still a great event with a rich history of Ray Bourque going on a rampage winning eight competitions including shooting 4-for-4 back in '92 and '93. It's still a Skill Competition staple, but they could add a few things to spice it up.

HOW TO FIX IT:
Make it 5 heats of head-to-head with 3 heats dedicated to the normal "receive pass and wrist/snap shot" and the other heats for slapshots and backhands. D-men have a designated area near the blueline in which to take slapshots from and they can either receive passes for one-timers to do stationary clappers. For backhanders, let the game's best backhand artists show off their skills from the hash marks as they pick corners (maybe Alexei Kovalev can show up and do one-handers?).

One timers, passing, puck control relay, stick handling, and goalie goals are what make up this event and boy does it suck. Scott Lewis of Sportsnet described the event perfectly in that "the skills challenge relay is best served as an opportunity to grab a snack and a cold beverage." It's two minutes of droll and a majority of that time seems to be spent watching guys struggle to saucer pass into a mini hockey net.

HOW TO FIX IT:
Just scrap it. Bring back the Puck Control Relay that was a classic event from 1990-2008 and let players show off their overall agility with speed and stickhandling. Have a team heat in which 3 skaters from each team relay and a heat in which the best on each team go head-to-head.

Some great history in this event from Al Iafrate's skullet breaking the 100mph mark, Al MacInnis winning the event 7 times and Zdeno Chara's reign of terror from 2007 to 2012. This event has been a big draw in recent years as we've witnessed Chara build on his hardest shot record eventually hitting a whopping 108.8mph in 2012. Unfortunately, Big Z wasn't an All-Star this year so we didn't get the Weber-Chara showdown we've seen in recent years. In fact, we didn't get any showdown this year as they removed the final round in which the hardest shooters from each team during the individual matches square off for an extra point.

HOW TO FIX IT:
The best thing about the hardest shot competition is having a showdown between two players and we didn't get that this year. Shea Weber only had one shot count and it was a bomb at 108.5mph. So close to the the record and it would have been nice to see him get two more shots at breaking the record. And who would Weber have faced in the final round? Alex Ovechkin of course. Ovi in the spotlight is great for these events and the NHL missed the mark this year.

Essentially the skills competition they use to decide games after 65 minutes of play, however this year they had groups of players trying to score as many goals as they could in 2 minutes. There was also a bonus puck that counted as two goals. This event would be OK if we didn't have shootouts in the NHL on a daily basis. Another thing that made this event unbearable was the use of the cameraman following the shooter in. This did not make things easier to see or "look cool" and was almost impossible to see where pucks were being shot.

HOW TO FIX IT:
Bring back the Elimination Shootout. This is a minor hockey end-of-practice staple and we loved it the four years they had it from 2008-2012. It has a King of the Hill type feel and you get some great battles near the end as players start to care about winning the event. Also, never let a cameraman follow the shooters in again.

Overall, the NHL Skills Competition is on the decline and the ratings reflect that. The NHL has had success with events in the past, but never seem content and are always looking to change. They've taken out some great events or changed classics for the worse. Looking at other leagues, the AHL Skills Competition is very well run and features the Puck Control Relay, Faster Skater using full lap of the ice, and the old Pass and Score Event in which three All-Stars go 3-on-0 and try to score on the opposing goalie. It's bananas and looks like a blast if you want a competition to see which goalie won't pull pull their groin.
Over in the KHL, while they have silly events like longest shot, they've got some YouTube sensations from their Breakaway Challenge that often overshadow anything from the NHL's version. They're probably just more creative over there or just better at borrowing moves from alumni games like the old puck-on-a-string trick

We have little doubt the NHL won't like the ratings they received from their 2015 Skills Competition and they should start the process of making the Skills Competition can't-miss television. Maybe poll fans to see what events they would like in the competition rather than change them every year? Bring back NHL All-Star alumni and get them on the ice goofing around with today's stars and maybe even competing in events as passers or judges. Make the event more charitable with donations on the line to different foundations for every goal scored or save made. Just do something and don't let the NHL Skills Competition turn into a waste of time for players and fans.

Posted by Dirty Dangle at 5:50 PM
Email ThisBlogThis!Share to TwitterShare to FacebookShare to Pinterest